Construction & Building is the global business of creating physical infrastructure such as residential buildings, highways, bridges, factories, airports and power plants. Normally the job is managed by the construction manager, supervised by the project manager, design engineer or project architect.

While these people work in offices, every construction project requires a large number of laborers, carpenters, and other skilled tradesmen to complete the physical task of construction. 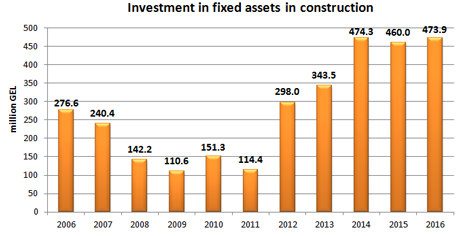 Overall, investment rates have fluctuated during the time depicted on the graph. It raised in 2014 and in contrast, lowest rates of investment were in 2009 and 2011.

Its important to mention that in 2017, 10 495 construction permits have been issued throughout Georgia.

When it comes to business practices, we believe that the strong company may not grow without successful social and sustainable policies. That is…