Georgia is considered to be one of the oldest homelands of metal processing in the world. From the Copper-Bronze Age, when man acquired metal, it became the origin of the jewelry, especially the noble metals (gold and silver).

Examples of works by early Georgian goldsmiths were discovered during archaeological excavations, dating back to the 8th-6th centuries BCE, found on the territory of the ancient kingdom of Colkheti, known as Colchis. Burial mounds of ancient nobles on the sites of Vani and Sairkhe explain why Colkheti was referred to as Golden Fleece land, along with Mikena, Sardi, and Babylon in Greco-Roman sources.

There are the couple of ores in the country, where gold can be mined: Madneuili, small town Kazreti and Ieli village Svaneti.  Rich Metals Group (RMG) is the one of the largest enterprises in Georgia and Caucasus region, engaged in mining activities in Bolnisi region, Georgia. JSC RMG Copper and LTD RMG Gold produce the copper concentrate and gold Dore alloys (half-fabricates) by mining and processing copper and gold containing ores. Currently, about 3000 employees work at the company, 90% of whom are local residents. 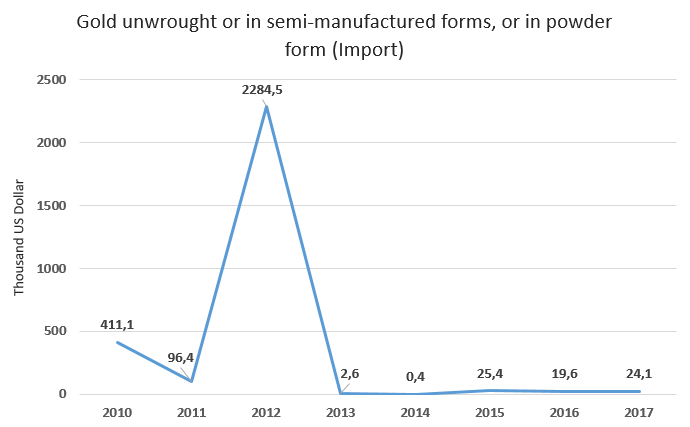 Chart illustrates rates of exported gold (unwrought, semi-manufactured, in powder form) from Georgia, between 2010 and 2017. Units are presented in thousand US dollars.

When it comes to business practices, we believe that the strong company may not grow without successful social and sustainable policies. That is…