The maximum utilization of the abundant hydro-resources is one of the priorities of the state. The main objective of the long-run energy policy is the attraction of foreign investments for the construction of the new power plants.

One of the objectives of this policy is the complete satisfaction of the country’s demand with its own resources, which should be implemented in stages: first, the import, and then the thermal generation replacement.

There is huge untapped potential (4 times more than exploited) for electricity generation, mostly from hydro resources, but also from wind, solar, geothermal and biomass sources as well.

Currently, 17 hydropower plants are under construction, seven of them, with total installed capacity of around 300 MW, started in 2015. By the end of 2015, a 230 MW gas-fired combined cycle Thermal Power Plant was commissioned and construction of first Wind Power Plant in Georgia has started. In 2016, construction works on 14 new HPP’s will commence. Georgian Energy sector is developing rapidly and with all the competitive advantages that country offers, it’s not too hard to see why.

Wind power offers great addition to hydro power generations, as wind generation is higher during winter, when hydro generation is lower. It’s estimated that share of wind power in total generation will reach 10% by year 2025. Currently, pilot 20 MW project, Kartli 1, is under construction. Developed by Georgian Energy Development Fund, this projects is one of the most efficient wind plants in the world and became first government project in the region which received EBRD project funding without additional guaranties from the state. Project capacity can be expanded up to 150 MW in the future. Two more wind projects are under development with many more under consideration.

By the end of 2015, new 230 MW combined cycle TPP, first of its kind in Georgia, was commissioned. Project was developed by Georgian Partnership Fund and will was built by Turkish company Çalik Enerji. Currently, Georgian Energy Development Fund is working on another 250 MW CCGT project. Power plant will be 250 MW and will be commissioned in 2019, with another 250 MW is being considered for the future.

Due to the geographical location of Georgia, the emanation of the Sun is rather high. In most regions of the country there are 250-280 sunny days in a year, which is approximately 6,000-6,780 hours per year. The annual radiation of the Sun varies depending on regions from 1,250-1,800 KWh/m2, while the average sun radiation equals 4.2 KWh/m2. The total annual solar energy potential in Georgia is   estimated to be 108 MW, which is equivalent to 34,000 tons of standard fuel.

According to modern hydro-geological studies, the Georgian geothermal water reserves reach 250 mln m3 per year. At present there are more than 250 natural and artificial water channels where the average temperature of geothermal waters ranges from 30 to 110 C, while the total debit is 160,000 m3 per day and night. These water channels are grouped into 44 deposits. Within the territory of 3,500 km there are bore-hole wells with the water temperature of 85 C and more. Up to 80% of the geothermal deposits are in Western Georgia. In the Zugdidi-Tsaishi geothermal area, there are now 9 productive, 7 reinjection and 3 observation bore-hole wells which are considered to be exploitable.

Thanks to an advantageous geographical location and a climate favorable to forest and agricultural development, Georgia is endowed with major potential for biomass power plants, especially for producing heat and hot water. Biomass could be of the most important sources of power supply in rural areas, given that forests cover 40% of the country’s total territory. 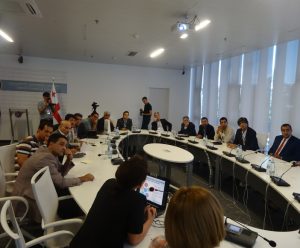