Georgian mineral waters are very famous not only in Georgia but in foreign countries also. Especially this product is realized by summer because hot weathers make bad effect to people, so consumers need minerals to be strong enough. And it’s no surprise that entrepreneurs are preparing for this season and for exporting in all over the world. The bestselling mineral waters of Georgia are: Borjomi, Nabeghlavi and Likani.

Georgia had mineral water export growth in every year from 2010 to 2014 years. Witch had acted good for Georgia’s economy. The export of mineral water was increasing by 12% -25% annually until the opening of the Russian market, after the opening of the Russian market in 2013, the export of waters increased by 45%, and in 2014 the figure was $ 137 123 million. In 2014, the Mineral waters took fourth place in the export products list.

In 2015, due to the crisis in the Russian market, export indicators continue to decline.

From 2015 mineral and freshwater exports from Georgia are growing annually. According to the National Statistics Office of Georgia, in January-April 2017, 45.8 million liters of mineral and fresh water have already been exported, which is 18.4% more than the same period last year. 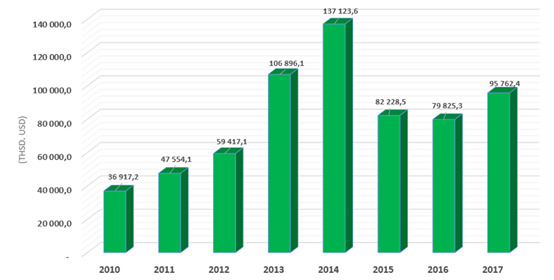