Protein rich hazelnuts are sweet tree nuts that grow in temperate zones and its mainly cultivated in Turkey, which produces about 60% of the world’s total production. Hazelnuts are used in products like, hazelnut oil, chocolate bars, spreads and coffee.

Georgia is considered as one of the largest suppliers of hazelnuts in the European market. In 2009-2012 Georgia was fifth among the exporting countries with the exception of the hazelnut export to the EU. Although Georgia is considered one of the biggest suppliers of nuts in the European countries, it does not take part in determining the price of the market.

According to FAO’s 2016 report, Georgia is the fourth in the world’s hazelnuts production share.

Samegrelo-Zemo Svaneti, Guria and Imereti are the largest producers of nuts at the country level. These regions produce more than 80% of the hazelnuts in Georgia.

However, this statistic may soon change. Last year in Samegrelo, farmers weren’t able to harvest even half of what they got in 2016 and the prognoses are disappointing.

According to the National Statistics Office of Georgia, the income received from the hazelnut in three months amounted to $ 17 million, while last year it was $ 32 million. The price of hazelnut in Georgia is low and varies from 3 to 5 GEL. In the world market, its price is 6 dollars.

The National Food Agency issued a statement that the damage inflicted by the pesticide amounted to GEL 63 million. That’s why the government started a special program against Stink bug this year.

In June 2017 , hazelnut plantations were given a chemical treatment against the pests. In total, an area spanning 351 villages in the regions of Samegrelo, Guria and Adjara, 53,000 hectares of land was treated, including local plots of land of residents and corn fields. Local residents were given 230,000 liters of treatment and 21,000 traps for the insects.

“The first step is to improve the quality. The main reason for export reduction is the low quality and productivity.” Said Alexander Motserelia, Chairman of the “Nut Production and Exporters Association”. 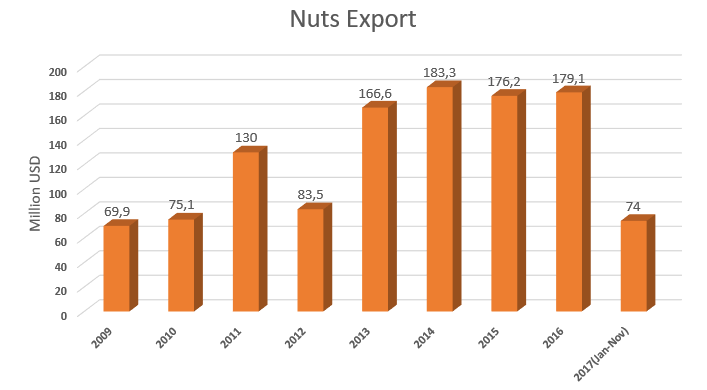 Horizontal bar chart shows statistics of exported nuts from Georgia, between 2009 and 2017 (Jan-Nov). Export value is shown in millions of USD.

Overall, export rates have fluctuated during the time depicted on the graph. It peaked in 2014 and the lowest rates of exported nuts from Georgia were in 2009 and 2010.