Tea is the oldest Chinese culture, known in 1753 by a well-known Swedish botanist Carl Lynne, first described as a scientific name (Thea). Tea is one of the best soft and most common flavors in the world and has many medicinal properties.

The Georgian tea has a 170 years of history, starting in 19th century, when the first bushes appeared in Guria. In 1864, Mikhail Eristavi first presented a sample of Georgian tea at the Russian International Exhibition in Saint Petersburg, which laid the foundation for Georgian tea worldwide.

Later in 1920s, Georgian tea-growing was recognized as a special area of economic activity. The Tea and Subtropical Cultures Research Institute was founded in Anaseuli, West Georgia, where new varieties of the tea were cultivated, focusing on tender shoots and special aromas. In 20th century, Georgia drastically increased the volume of the tea production and it was a main supplier of the Soviet Union for decades.

Nowadays, Georgia is exporting its tea to the world. According to the official information, tea plantations are still around 19 K ha, out of which 2.4 K are exploited and the rest are covered with thorn birds.

“A couple of years ago, Georgian Tea Program was launched by Georgian Government which aimed to restore tea plantations. Approximately, one thousand hectares have been rehabilitated under the program. The state help for Georgian tea and support for agricultural cooperatives will be continued, tea leaf processing technologies will be further improved and developed that will later strengthen its positions in the international tea markets and increase its export”, said Levan Davitashvili, the Minister of Agriculture of Georgia.

The chart gives information about Georgia tea export statistics. It is clear from the chart that 2011 and 2012 was the best years for Georgia for last 7 years. 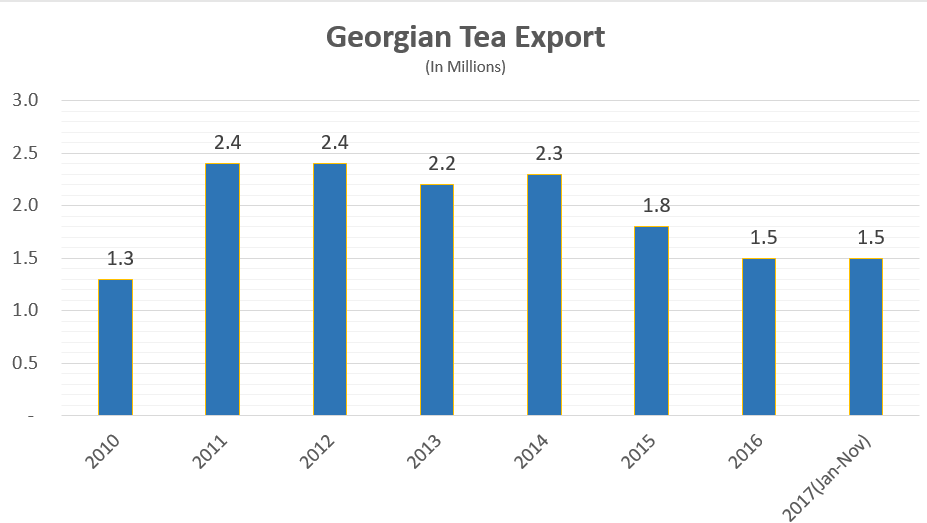 In addition, Georgia is starting to export 2 kinds of tea species to China, which was imported from China to Georgia many years ago. The reason is that this types of tea bushes no longer exist in China. However, China is also planning to cultivate tea plantations in Georgia, as they are strongly contented with quality of Georgian tea.

The municipality of Dedoflistkaro is a biggest  one in Kaheti region.  The area is 2529,2 km, it’s a 17% of Kakheti. Municipality population are…