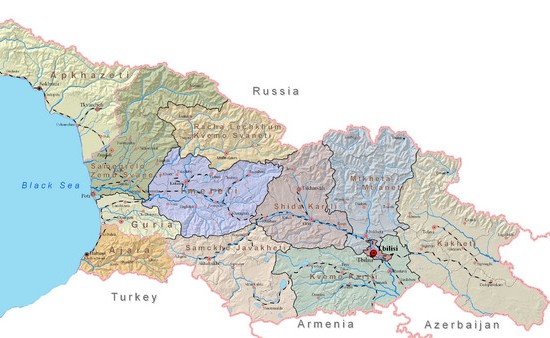 Georgia is a country located on the junction of Eastern Europe and West Asia,and generally considered to be part of Europe.Nestled between the Greater Caucasus and Lesser Caucasus mountain ranges, it is bounded to the west by the Black Sea, to the north and northeast by Russia, to the south by Turkey and Armenia, and to the southeast by Azerbaijan. The capital and largest city is Tbilisi. Georgia is a unitary, semi-presidential republic, with the government elected through a representative democracy.

Georgia is a member of the Council of Europe, OSCE and Eurocontrol; since 2014, it is also part of the European Union’s Free Trade Area. As a developing economy, Georgia has achieved significant progress in recent years, “moving from a near-failed state in 2003 to a relatively well-functioning market economy in 2014”. In 2007, the World Bank named Georgia the World’s number one economic reformer, and has consistently ranked the country at the top of its ease of doing business index.

In June 2014, Georgia signed the Association Agreement with the European Union which entered into force in July 2016.

Georgia has successfully implemented the Visa Liberalization Action Plan (VLAP) with the European Union. In October 2016, EU states agreed to grant Georgian nationals visa-free travel to the Schengen zone and Visa-free travel came into force in 2017.